Posted on September 21, 2017 by PaoloViscardi | 1 Comment
On Wednesday 4th October we’re pleased to welcome Professor Peter Doyle of London South Bank University, who is a geologist and military historian. Peter will be exploring the significance of terrain, geology and geologists in the Great War (1914–1918), drawing on examples from his new book Disputed Earth (you can buy a signed copy on the night if you like!)

To the outside observer the trench warfare of the First World War I seems like a static slog of attrition, but in reality the trenches pitted military engineers against artillerymen in an arms race that saw trenches and artillery pieces become ever more sophisticated.
Trench lines snaked across Europe, cutting through varied terrain, with every aspect of the ground conditions having an impact on the health and well-being of the men. This included the ability of the trenches to protect their occupants, stop attacks, and aid in the assault. Men were mired in seemingly bottomless mud, facing hills and ridges, with high ground to be taken at all cost, the significance of geology to the outcome of the conflict was very real. Military engineers enlisted geologists, who helped drain the trenches, map out and combat unsuitable ground, design and build dug-outs and pill-boxes. Geologists ensured the supply of water and other resources and improved the lot of the frontline soldier. 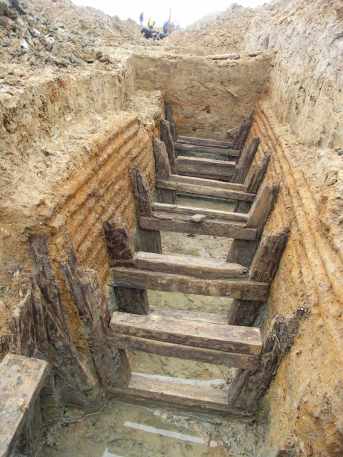 Geology had a significant role in this defensive war; but arguably it had an even greater one in planning the offence, by influencing the effects on artillery fire, undermining the enemy, controlling the flow of poisonous gas, or permitting the use of tanks. A tangible example of how knowledge can become power in the most immediate sense.
Join us upstairs at the Old King’s Head, near London Bridge station. Doors open at 6pm for a 7pm start and as usual the event is free, but we will have a whip-round to cover costs – we hope to see you there!

Like Loading...
This entry was posted in Events and tagged geology, military history, Science, talks, Western Front. Bookmark the permalink.

One response to “Prof Peter Doyle – Disputed Earth: Geology and the Western Front”