PubSci speaker and KCL physicist, Malcom Fairbairn, has drawn our attention to a free talk marking the 10th anniversary of the discovery of the Higgs boson. It’s right up our street and we’re very happy to invite the PubSci community in the London area to attend tomorrow, Tuesday 5th July 2022.

PubSci may not be meeting in person at the moment, but how could we not mark the 10th anniversary of such a momentous scientific discovery? We don’t normally use this channel for anything but PubSci’s own events and announcements but are making a singular exception for this exciting anniversary talk.

A talk by John Ellis, Kate Shaw, and Tevong You on the past, present, and future of the Higgs boson and particle physics

James Clerk Maxwell discovered the laws of electromagnetism in 1865 while at King’s College London (KCL). Almost a century later, Peter Higgs, a KCL alumnus, postulated the existence of a particle now known as the Higgs boson. It is one of the cornerstones of the Standard Model of particle physics, which describes successfully all the visible matter in the Universe. The Higgs boson was the last missing piece to be discovered, on July 4th 2012 by the ATLAS and CMS experiments using the Large Hadron Collider at CERN.

Join us for an evening of particle physics celebrating ten years since the Higgs boson discovery, where we will share the story leading up to this landmark achievement in the history of physics, review progress since the Higgs discovery, and look towards the future of our quest to understand the fundamental laws of the Universe.

Everyone is welcome to this public event! 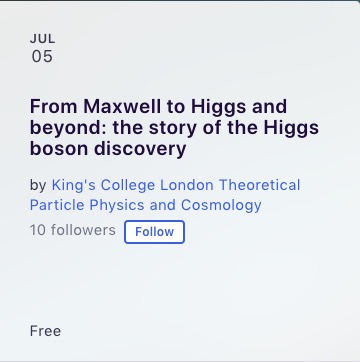 Register for your free ticket here

This is an external event organised by KJCL Physics. Any questions should be directed to the organiser as PubSci will not be able to answer queries. At the time of writing, we do not know whether the event will be streamed.

Hope to see you there!