On Wednesday 2nd March we’re pleased to have Gail Austen speaking about the important and evolving  role of citizen science.

Gail is studying towards a PhD in Biodiversity Management at the Durrell Institute of Conservation and Ecology (DICE), University of Kent. She has an MSc in Taxonomy and Biodiversity from Imperial College, having been swayed by the course being hosted at the Natural History Museum, where she also volunteered. Prior to this (overlooking a stint in finance), she worked for a Local Records Centre and become involved in local conversation, including spending the last six years as Chair of the Kent Reptile & Amphibian Group (KRAG). Gail has a passion for UK wildlife and is an advocate of amateur naturalists and citizen science. 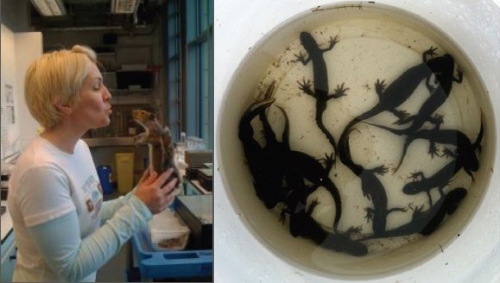 It is generally accepted that there has been a decline in field biology skills, with some drawing a parallel between the ability to identify flora and fauna with ‘traditional country skills’. There are a number of specialists concerned with the naming and cataloguing of live, dead, extant and extinct specimens, both as part of their job and in a recreational capacity. However, there have been questions raised over the accuracy of the data collected in a ‘non-scientific’ manner, but in order to answer questions about the natural world, the reliance on citizen science and volunteer collected data is increasing.  Using established methods used in face recognition studies in psychology, my research investigates accuracy in visual species identification, what makes an expert, and whether we can improve these skill sets as a legacy for generations to come.

Join us from 6pm for a 7pm start at the Old King’s Head, near London Bridge station. As usual, the event is free, but we will have a whip-round to cover costs – we hope to see you there!

2 responses to “Gail Austen – Citizen Science: What Makes An Expert?”